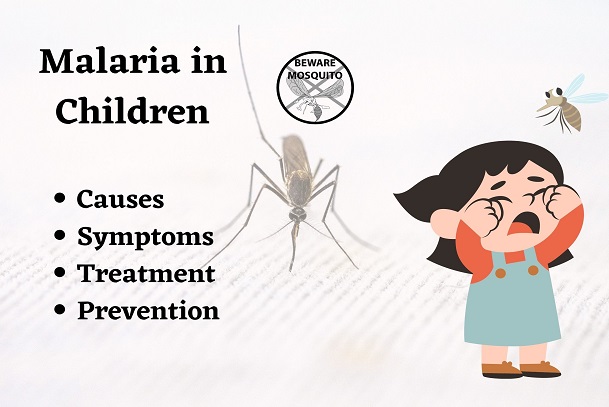 Summary
Malaria is caused by the plasmodium through a mosquito bite. It can be severe in children if not diagnosed and treated early thus causing death in those children.

What is Malaria in Children?

The transmission of malaria is the same in both children and adults. Yet, it can become severe in children below the age of 5 years if it is left untreated. In the first three months after a child is born, the body is protected by the antibodies gotten from the mother. These antibodies protect the baby from malaria, but soon wears-off once the child attains the ages of 4 - 5 months and above. After wearing off, the child is not protected with any antibodies and can potentially have severe malaria.

After a child has been bitten by an infected mosquito, it can take up to 14 days before the symptoms start manifesting in such a child. And these symptoms could include:

What are the Consequences of Severe Malaria?

Severe malaria can have the following consequences in children once left untreated:

Cerebral Malaria: This case is often rare (affects only 2% of children with malaria) but when there is a huge presence of the parasite plasmodium in the bloodstream of a child, it can block the small blood vessels to the brain thus causing seizures and coma.

Organ Failures: Malaria can cause damage to some organs such as the kidney, liver, or spleen in a child. And when these conditions occur, they can be very life-threatening.

Severe Anaemia: When malaria is severe, it can weaken the red blood and make it unable to carry enough oxygen to the muscles and organs of the child, which then leads to drowsiness and weakness. And in this case, the child might require a blood transfusion.

Hypoglycemia: Severe malaria can cause low blood sugar in a child and this can lead to a coma.

Sudden Death: When the above complications are ignored, severe malaria can lead to the death of a child.

Once parents notice the symptoms of malaria in their children, treatment should commence immediately without waiting for test results. Oral medications of artemisinin-based therapy such as artemether/lumefantrine drugs such as Coartem or Amartem syrup and paracetamol can be administered immediately to the child.

For severe complications from malaria, the child should be rushed to a health center where artesunate injection by intravenous or intramuscular is given first, then intravenous dextrose saline drips are passed into the body. Once the child regains consciousness, oral medication can be administered.

Illustrative Case I: A five-year-old boy is brought to the hospital’s outpatient department.  The mother says he was well until that morning when he woke up and said he was feeling tired and refused breakfast.  When the mother touched him, he felt hot and she gave him a tablet of Paracetamol. Examination showed a well-nourished 15-kg child, not pale, alert, and with an axillary temperature of 38.50C.  The rest of the examination is normal. Malaria was suspected

Management: The child has malaria, and was given Coartem syrup and paracetamol; afterward the child fully recovers.

Illustrative Case II: A 3-year-old boy suddenly started feeling feverish and became breathless. During the examination, he was pale and dyspnoeic with tachypnoea. Pulse is 110/min regular; normal heart sounds but there is a 3rd heart sound; the chest is clear but the abdominal exams showed hepatosplenomegaly.

Diagnosis & Treatment: This patient has severe malaria and should be confirmed with a blood test for malaria parasite, and severe anaemia. Blood film confirmed malaria parasite and a blood test showed severe anaemia with hemoglobin less than 4g/dl. He was given an artesunate injection and blood transfusion due to low blood count. When he regained consciousness, he was placed on antimalarial drugs from which he fully recovered.

Illustrative Case III: A three-year-old girl developed a fever in which the mother gave her paracetamol to bring down her temperature. After a few hours, the mother checked on the girl who had become unable to wake up; shook her gently but she could only stare blankly and was unable to make eye contact. She was then rushed to a hospital where she convulsed in the presence of a doctor. She was suspected to have cerebral malaria. Blood film confirmed the malaria parasite.

Diagnosis & Treatment: The patient has cerebral malaria, a form of severe malarial infection. Treatment began as she was given intramuscular quinine. The child becomes responsive after 15 hours. By the end of two days, her alertness had continued to improve, but she was still unable to fix her gaze or follow a moving object.  She also experienced weakness on her right side. A month after discharge from the hospital, her vision had improved, but she still walked with a limp.

How To Prevent Malaria in Under-five Children in Nigeria

There are various ways malaria can be prevented in children under the ages of five, and they include:

Primary Prevention: The best mode of fighting malaria is preventing infection from mosquito bites. This is known as VECTOR CONTROL. The WHO recommends that all persons living in a malaria-endemic malaria practice protection against malaria transmission. And this can be done through the use of insecticides and mosquito repellent; clearing of drainage or stagnant water; use of insecticide-treated bed nets.

Prophylaxis: This is the preventive measure taken to avoid malaria among children. Intermittent preventive treatment with Sulphadoxine-pyrimethamine (SP) (Fansidar) and Amodiaquine (camoquin) is given to infants (below 12 months of age at the time of first second and third rounds of vaccinations against tetanus, diphtheria, and pertussis then at the time of vaccination against measles.

Secondary Prevention: This involves prompt treatment once malaria symptoms manifest or the presence of malaria has been diagnosed.

It is important for parents to take prompt medical treatment When malaria symptom is recognized in children without waiting for a diagnosis or test result to confirm the presence of malaria. This can be done by using artemisinin-based therapy of artemether/lumefantrine drugs such as Coartem syrup. But in severe cases, these children should immediately be taken to a hospital where artesunate injection is used as the first treatment combined with intravenous dexhose saline before oral medications are administered.