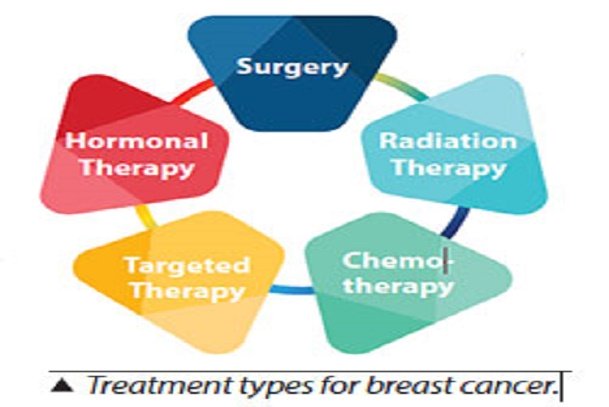 Most women with breast cancer in stages I, II, or III are treated with surgery, often followed by radiation therapy. Other also get some kind of drug therapy. Generally, the more the breast cancer has spread the more treatment one would likely need. But these treatment options are affected by personal preferences and other information about breast cancer, and they include:

Most women with breast cancer in stages I to III sometimes get some kind of drug therapy as part of their treatment. This may include:

Stage 0 breast cancers, ductal carcinoma in situ (DCIS) is a non - invasive cancer where abnormal cells have been found in the lining of the breast milk duct. In Stage 0 breast cancer, these cells had not spread outside of the ducts or lobules into the surrounding breast tissue. Ductal Carcinoma in Situ is highly treatable, but if it’s left untreated or undetected, it can spread into the surrounding breast tissue.

In most cases, a woman with DCIS can choose between breast-conserving surgery (BCS) and simple mastectomy. But sometimes a mastectomy might be a better option.

In breast-conserving surgery (BCS), the surgeon removes the tumor and a small amount of normal breast tissue around it. Lymph node removal is not always needed with BCS, but it may be done if the doctor thinks the area of DCIS might also contain invasive cancer. The chances an area of DCIS contains invasive cancer goes up with tumor size and how fast the cancer is growing. If lymph nodes are removed, this is usually done as a sentinel lymph node biopsy (SLNB).

If BCS is done, it is usually followed by radiation therapy. This lowers the chance of the cancer coming back in the same breast (either as more DCIS or as an invasive cancer). BCS without radiation therapy is not a standard treatment, but it might be an option for certain women who had small areas of low-grade DCIS that were removed with large enough cancer-free surgical margins.

Simple mastectomy (removal of the entire breast) may be needed if the area of DCIS is very large, if the breast has several separate areas of DCIS, or if BCS cannot remove the DCIS completely (that is, the BCS specimen and re-excision specimens still have cancer cells in or near the surgical margins). Many doctors will do a SLNB along with the mastectomy. This is because if an area of invasive cancer is found in the tissue removed during a mastectomy, the doctor won’t be able to go back and do the SLNB later, and so may have to do a full auxiliary lymph node dissection (ALND).

Women having a mastectomy for DCIS typically don’t need radiation therapy and may choose to have breast reconstruction immediately or later.

Here, breast cancers are still relatively small and either have not spread to the lymph nodes or have spread to only a tiny area in the sentinel lymph node (i.e. the first lymph node to which cancer is likely to spread).

Surgery is the main treatment for stage I breast cancer. These cancers can be treated with either breast-conserving surgery (BCS; sometimes called lumpectomy or partial mastectomy) or mastectomy. The nearby lymph nodes will also need to be checked, either with a sentinel lymph node biopsy (SLNB) or an auxiliary lymph node dissection (ALND). In some cases, breast reconstruction can be done at the same time as the surgery to remove the cancer.

Whenever BCS is done, radiation therapy is usually given after surgery to lower the chance of the cancer coming back in the breast and to also help people live longer. In a separate group, women who are at least 70 years old may consider BCS without radiation. Radiation therapy in this set of women still lowers the chance of the cancer coming back, but it has not been shown to help them live longer. When mastectomy is done, radiation therapy is less likely to be needed, but it might be given depending on the details of your specific cancer.

These breast cancers are larger than stage I cancers and/or have spread to a few nearby lymph nodes.

Stage II cancers are treated with either breast-conserving surgery (BCS; sometimes called lumpectomy or partial mastectomy) or mastectomy. The nearby lymph nodes will also be checked, either with a sentinel lymph node biopsy (SLNB) or an auxiliary lymph node dissection (ALND).

If a woman was initially diagnosed with stage II breast cancer and was given treatment such as chemotherapy or hormone therapy before surgery, radiation therapy might be recommended if cancer is found in the lymph nodes at the time of the mastectomy. If chemotherapy is also needed after surgery, the radiation is delayed until the chemo is done.

In some cases, breast reconstruction can be done during the surgery to remove the cancer. But if there is a need for radiation after surgery, it is better to wait to get reconstruction until after the radiation is complete.

In stage III breast cancer, the tumor is large (more than 5 cm or about 2 inches across) or growing into nearby tissues (the skin over the breast or the muscle underneath), or the cancer has spread to many nearby lymph nodes.

Stage III cancers also include some inflammatory breast cancers that have not spread beyond nearby lymph nodes. Treatment of these cancers can be slightly different from the treatment of other stage III breast cancers.

Most often, these cancers are treated with Neoadjuvant chemotherapy (before surgery). This help to shrink the tumor enough for a woman to have breast-conserving surgery (BCS). If the tumor doesn’t shrink enough, a mastectomy is done.

Often, radiation therapy is needed after surgery. If breast reconstruction is done, it is usually delayed until after radiation is complete. In some cases, additional chemo is given after surgery as well.

Another option for stage III cancers is treatment with surgery first. Because these tumors are fairly large and/or have grown into nearby tissues, this usually means getting a mastectomy. For women with fairly large breasts, BCS may be an option if the cancer hasn’t grown into nearby tissues. SLNB may be an option for some patients, but most will need an ALND. Surgery is usually followed by adjuvant chemotherapy, and/or hormone therapy, and/or HER2-positive treatment (trastuzumab, pertuzumab, or neratinib). Radiation is recommended after surgery.

For women with stage IV breast cancer, systemic (drug) therapies are the main treatments. These may include:

Treatment can often shrink tumors (or slow their growth), improve symptoms, and help women live longer, yet these cancers are considered incurable.

Although systemic drugs are the main treatment for stage IV breast cancer, treatments such as surgery, radiation therapy, or chemotherapy are sometimes used as well. These can help treat breast cancer in a specific part of the body, but they are very unlikely to get rid of all of the cancer. These treatments are more likely to be used to help prevent or treat symptoms or complications from the cancer.

Radiation therapy and/or surgery may also be used in certain situations, such as: