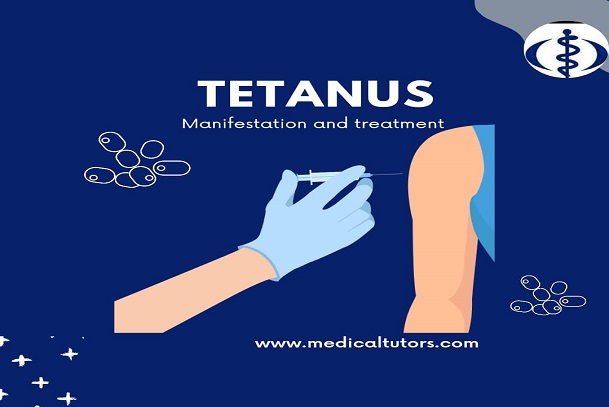 Summary
Tetanus can affect any person irrespective of their age or status, in as much there is an injury sustained. And once the person is unvaccinated or not fully vaccinated as a child, they can have symptoms as painful muscle stiffness all over the body.

Tetanus is a serious disease that affects the nervous system caused by a toxin-producing bacterium called clostridium tetani which causes muscle contractions, especially around the jaw and neck.

Almost all cases of tetanus occur in people who have never been vaccinated as a child or adult, nor kept up to date with their booster shots.

Signs and Symptoms of Tetanus

Tetanus can start from an injury such as a nail puncture, a cut, or a bite from an animal or another person; and it may take any time from 3 to 21 days for tetanus signs and symptoms to manifest. Most cases of tetanus occur within 14 days. The first sign is most commonly spasms of the jaw called trismus, with the inability to open the mouth.

Symptoms of tetanus include:

How Is Tetanus Diagnosed?

Tetanus is diagnosed based on physical examination, medical and vaccination history, and the signs and symptoms of pain, muscle rigidity, and muscle spasms. Unlike other types of disease, tetanus is not generally diagnosed through laboratory tests, but medical doctors can perform some laboratory tests if there are suspicions of other conditions with similar signs and symptoms (such as meningitis or rabies).

Once a patient is infected with tetanus disease and does not receive treatment, the risk of life-threatening complications is higher. Complications of tetanus may include:

Laryngospasm: This is an uncontrolled or involuntary tightening of the vocal cords

Breathing Problems: Breathing problems that can be life-threatening could occur from the tightening of the vocal cords and muscle rigidity in the neck and abdomen.

Aspiration Pneumonia: A lung infection caused by the accidental inhaling of contents or secretions of the stomach into the lungs, thus developing and leading to pneumonia. This can occur if the patient is fed by mouth.

Pulmonary Embolism: This happens when a blood clot has traveled from another part of the body and blocks the main artery of the lung affecting breathing and circulation. This can occur if there is prolonged immobilization of the lower tissues (especially in compound fractures causing tetanus).

Death: Death from tetanus is often caused by a blocked airway during spasms or damage to the nerves that regulate breathing, heart rate, or other organ functions. The death rate in tetanus is usually very high.

How Is Tetanus Treated?

There's no cure for tetanus. A tetanus infection requires emergency and long-term supportive care while the disease runs its course. Treatment consists of wound care, and medications to ease symptoms which are usually done in a medical facility, often in a referral hospital.

Any wound, cut or injury sustained must be thoroughly cleaned to prevent infection. A tetanus-prone wound should be treated immediately by a medical professional.

A wound likely to develop tetanus is defined as:

Any patient with a wound listed above should receive Tetanus Immunoglobulin (TIG) as soon as possible, even if they have been vaccinated. Tetanus immunoglobulin contains antibodies that kill Clostridium tetani. It is injected into a vein and provides immediate short-term protection against tetanus. TIG is just short-term and does not replace the long-term effects of vaccination.

Also, antibiotics such as penicillin or metronidazole (or tetracycline) can be prescribed for tetanus treatment. These antibiotics will help prevent the bacterium from multiplying itself and producing neurotoxins that cause muscle spasms and stiffness.

In treating muscle spasms and stiffness, a muscle relaxer such as diazepam (valium) is given to relax the muscles, and reduce anxiety. A tetanus vaccine is also given along with the treatment.

In some cases, a surgical procedure called debridement is used to remove dead or infected tissue. If there is laryngospasm, a patient may require a tracheostomy and a breathing tube to allow free breathing.