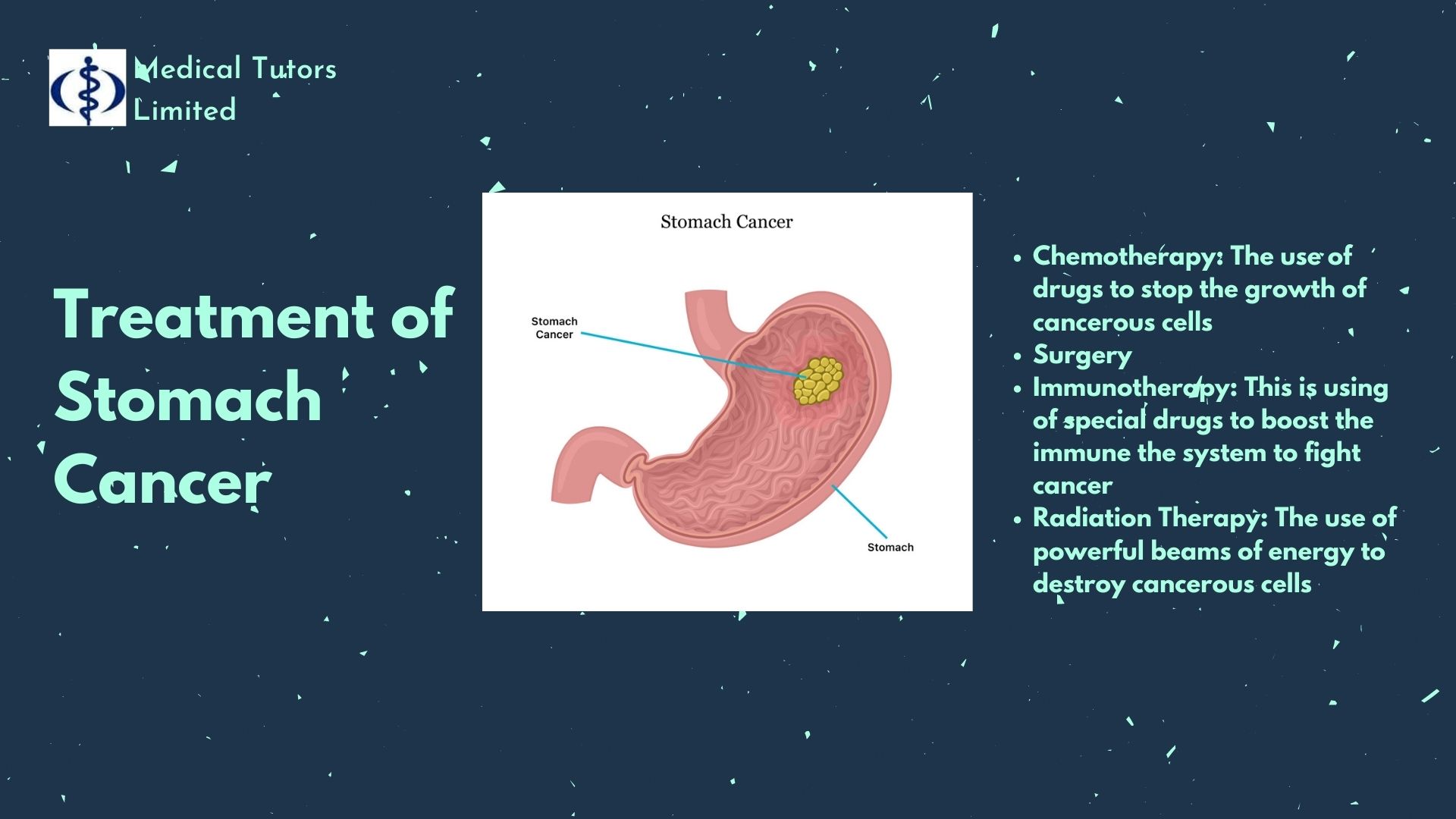 Summary
Treatment for stomach cancer can depend on several factors such as the stage (severity) of the cancer; the patient’s age; his/her overall health; their preferred choice of treatment plan.

In treating stomach (gastric) cancer, there are several ways in which stomach cancer can be treated. Like other types of cancer, the possibility of surviving or recovering in time for stomach is dependent on the time of diagnosis, giving such patient a better lifeline at living for a longer period of years.

Treatment for stomach cancer can depend on several factors such as the stage (severity) of the cancer; the patient’s age; his/her overall health; their preferred choice of treatment plan. Also, medical scientist can give advice on which treatment plans can be suitable for such patients; although not too often but this can also be a factor to be considered especially when the side effects during those treatment options may negate the patient’s overall health conditions.

Just like other cancers where surgery is always used, stomach cancer can also use the surgery options but due to stomach cancer having several approaches in its treatment, surgery could be avoided in most cases.

Chemotherapy is the use of specialized drugs to stop the growth (rapid) of cancerous cells in the body. This is by either killing those cells or by stopping them from multiplying or dividing themselves. Taken either through injection or the mouth, the drugs flow through the bloodstream, reaching the cancer cells throughout the body. These drugs are usually given at a specific or schedule time frame, given over a set period of time.

Chemotherapy can be given before surgery so as to help shrink the cancer especially when the cancerous tumor might have grown a little big, and aid easy removal. It can also be combined with radiation therapy.

The side effects associated with chemotherapy may depend on the patient and the dose used, and they can include: fatigue, nausea, vomiting, loss of appetite, diarrhea, risk of getting infection and hair loss. But these side effects go away after treatment has been completed.

Target therapy is a treatment plan that makes use of drugs to focus on the specific weaknesses within the cancer cells. It targets the patient cancer’s specific genes, proteins, or the tissues environment that contributes to the growth of these cancer cells and its survival. And by doing this, these cancer cells die easily.

Unlike chemotherapy which may kill some healthy cells during the process of treatment, targeted therapy only focuses on the cancerous cells i.e., focusing on specified target once tests to identify those genes have been take, since not all tumors in the cells have the same target.

The side effects for target therapy are quite similar to chemotherapy.

Immunotherapy, also called biologic therapy is a drug treatment that helps the immune system to fight cancer. This is using materials made either by the body or in a laboratory to boost, direct, or restore the body’s natural defenses against stomach cancer. It is mostly used when the cancer of the stomach is advanced, or if it comes back or probably spreads to other parts of the body.

The side effects of immunotherapy can include: skin reactions, flu, weight changes and diarrhea.

NOTE: Chemotherapy, targeted therapy and immunotherapy can also be classified under the medication treatment plan.

Radiation Therapy is a treatment option that makes use of high-powered beams of energy such as x-rays and other particles to destroy cancerous cells or keep them from growing. For stomach cancer, radiation therapy can be used before surgery to shrink the cancer so that it's more easily removed. It can also be used after surgery to kill any cancer cells that might remain.; and is often combined with chemotherapy.

Although not a commonly used treatment plan in stomach cancer because of the risk of harming nearby organs, radiation therapy can be used to relieve side effects such as pain or bleeding caused by a growing cancer for advanced stomach cancer that cannot be removed with surgery.

The side effects from radiation therapy include fatigue, stomach indigestion, vomiting, mild skin reactions, and diarrhea. But most of these side effects go away after treatment has been completed.

Treatment of Stomach Cancer by Stages

Stage 0: At this stage, the inside lining of the stomach has a group of unhealthy cells that may turn into cancer. Surgery usually cures it, where the doctor may remove part or all of the stomach, as well as nearby lymph nodes i.e., small organs that are part of the body's germ-fighting system.

Stage I: At this stage, a tumor is present in your stomach's lining, and it may have spread into the lymph nodes. Just like stage 0, the medical doctor might suggest that the patient have surgery to remove part or all of the stomach and nearby lymph nodes. Chemotherapy can also be used, especially before surgery so as to shrink the tumor and afterward to kill any cancer left.

Stage II: Here, there is the presence of cancer in the deeper layers of the stomach and maybe also nearby lymph nodes. Surgery maybe used to remove part or all of your stomach, as well as nearby lymph nodes. Chemotherapy or radiation can also be used to aid the removal or killing of the cancer cells.

Stage III: At this stage, there is the presence of cancer in layers of the stomach, as well as other organs close by, like the spleen or colon. Surgery is to remove the entire stomach, along with chemo or chemoradiation.

Stage IV: In this last stage, the cancerous cells have spread to other organs like the liver, lungs, or brain. Chemo, radiation, or both may be used at this stage, too. The patient might also get targeted therapy. These drugs attack cancer cells, but leave healthy ones alone, which may mean fewer side effects.