Tuberculosis in Nigeria and Prevention 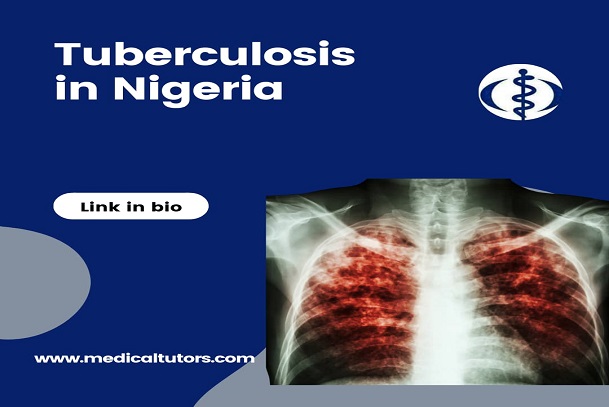 Summary
Tuberculosis is one of the global public health issues in developing countries, especially in Nigeria where there is a significantly high number of persons living with the disease.

In the year 2018, Nigeria was listed as the number one country in Africa and 6th globally with the highest TB burden. Unfortunately, the problem of TB in Nigeria has been complicated by the emergence and spread of drug-resistant TB and a high burden of HIV/AIDS (NTBLCP, 2017; WHO, 2018). The problem of TB is worsened when there is also a high burden of HIV infections, as people with HIV are more likely to develop active TB.

Furthering the problem of TB, In 2016, Nigeria is ranked among the 10 countries that accounted for 77% of the global gap in TB case detection and notification. It is reported that Nigeria contributes about 8% of the 4.3 million TB cases missed globally.

Despite Tuberculosis being a vaccine-preventable disease, the World Health Organization (WHO) shows that every year, around 245,000 Nigerians die from tuberculosis (TB) and about 590,000 new cases occur (of these, around 140,000 are also HIV-positive). TB accounts for more than 10% of all deaths in Nigeria. Every hour, nearly 30 people die from the disease, despite effective treatments being available.

To reduce the current situation of TB, the United Nations High-Level Meeting (UNHLM) in 2018 proposed a global target of identifying more TB cases and putting people on treatment by the year 2025, with a 90% reduction in TB deaths and an 80% reduction in new cases by 2030).

At this same meeting, Nigeria also committed to diagnosing and treating over 1.2 million TB cases and placed about 2.3 million people on TB preventive therapy between 2018 – 2025.

Presently, Nigeria is yet to make significant progress in the fight against TB. It still accounts for at least over 300,000 unreported cases. The failure behind this underachievement might be partly attributed to the COVID-19 pandemic which has been largely blamed for the disruption of several health targets globally.

In Nigeria, one of the factors that have hampered the progress of TB has been stigmatization. Recent surveys and studies have shown that the fear of discrimination, restricts people with TB symptoms from seeking help, making it much more likely that they will become seriously ill. These TB patients delay reporting to a hospital, infect others, and consequently increase mortality from the disease.

Most people who are TB-positive tend to stop treatment because they are being stigmatized by relatives, neighbors, or colleagues, especially when these patients are asked to stay away or not infect them with the disease. Even after completing their treatment, most TB patients tend not to recover from the shame of contracting TB. So, in a quest to make sure diagnosed patients are placed and retained on treatment accordingly, stigma and discrimination must first be tackled.

If people’s awareness of TB especially in rural communities remains low, the disease would be a huge task to eradicate. There are existing myths and beliefs about TB in these areas even among the educated ones, thus restricting people from accessing treatment for TB.

Once the awareness of TB increases, especially in rural communities, it would help to further reduce the unnecessary stigma and discrimination associated with the disease. This will also help various persons understand the symptoms and the importance of seeking medical help immediately.

Misdiagnosis is also another major contributor to addressing TB. Diagnosing TB early is very important, and it will help to start treatment early, thus creating a healthy recovery time.

TB misdiagnosis is quite rampant among children especially those who are under the age of five years. Despite the availability of the Bacille Calmette-Guerin (BCG) vaccines which help to prevent TB, more children still get sick from the disease because their parents or guardians fail to vaccinate them at the appropriate time. Also, having children outside the health facility makes it difficult to administer vaccines to them.

Tuberculosis Control: What Can Be Done in Nigeria?

For those with latent TB, who are co-infected with HIV, the WHO recommends the use of preventative therapy to reduce the risk of developing active TB. This is a relatively low-cost intervention, but currently, only around 38,000 persons have received this therapy in Nigeria; and this will need to be substantially expanded if deaths from TB are to be reduced.

Tuberculosis preventive treatment (TPT) consists of a course of one or more anti-tuberculosis medicines given to prevent the development of TB disease. TPT is only given to people who are infected with TB bacteria or have been exposed to it and are at a higher risk of developing TB disease than the general population. TPT is considered one of the most critical public health measures to protect both individuals and the community from TB.

TPT is intended to eliminate TB bacteria that have infected the body before they can damage the organs and cause illness TPT will only work if given when there is no evidence of active TB disease.

Isoniazid given daily for 6 to 9 months has been the most widely used TPT regimen worldwide. It has a long-standing history of use, good tolerance in most people, and a lot of evidence for effectiveness.

Rifampicin and rifapentine (known as rifamycin) are medicines that can reduce the length of TPT significantly, which is an important advantage for any treatment. Rifampicin can be given alone for 4 months (“4R”) or with isoniazid for 3 months (“3HR”).

Identifying those who have developed active TB and treating them accordingly.

Identifying those who develop active TB is complex. The symptoms of (active) pulmonary TB include cough, fever, night sweats, and weight loss, many of which are similar to symptoms of common diseases. As with most TB programs, Nigeria relies primarily on ‘passive case finding’ to identify cases of active TB. This strategy is based on the expectation that those with TB symptoms will present themselves to health service providers for their symptoms, and that health facilities and staff are sufficiently equipped and skilled to recognize and act on them. Unfortunately, Nigeria has one of the lowest rates of TB case detection in the world, with only 16% of all cases of TB being notified to the National Tuberculosis and Leprosy Control Program (NTLCP).

The primary cause of the low rate of case detection is a lack of access to high-quality TB services. In many other countries of the world, increased access to TB care has been achieved through the decentralization of TB services to the periphery of the health system. However, a lack of capacity in the primary health system means that in practice the NTLCP often has to work through hospitals to ensure high-quality TB diagnosis and treatment. In addition, access to primary health care services is patchy and varies considerably by state, reliant on investment decisions made by each local authority. In addition to the lack of availability of high-quality treatment, lack of awareness in the population of TB, and its symptoms is a major cause of delay and seeking treatment from inappropriate providers.

Aside from resulting in poor case detection, the lack of access to TB services also creates considerable costs and hardship for those with TB (and their families) and promotes the transmission of TB to others. A recent study found that the majority of those with TB symptoms first visit inappropriate providers, with more than 80% first visiting pharmacies and traditional healers, paying for unnecessary treatment, which can be extremely costly. Another recent study, set in Ebonyi State, found that even when qualified providers are accessible, patients may continue to incur considerable transportation, food, and visit costs, even though national policy exempts those with TB (or suspected of having TB) from charges. The overall lack of access to appropriate health services results in an overall delay. From the patient’s display of symptoms to receiving treatment will take around 3 months to complete, during which time others in a patient’s community may be infected.

The lack of access to high-quality TB care has led the NTLCP and WHO to suggest that further strengthening and decentralization of TB services will be key going forward, together with improved education programs and implementing more active forms of case detection, particularly in highly crowded urban settings.

When TB patients can reach appropriate services, the most common method of diagnosis is smear microscopy. This is recommended by the WHO and is widely used in Nigeria as a low-cost method of TB diagnosis. Those who have a positive smear test, are described as having ‘smear positive’ TB and are the most infectious of TB patients. However, microscopy is far from a perfect test and may miss substantial numbers of those with active TB. This is a particular issue for those also infected with HIV, and thus this lack of diagnostic accuracy may provide an additional explanation for the low TB case detection rate in Nigeria. Since 2011, WHO has recommended the Xpert MTB/RIF assay for widespread use in the diagnosis of TB. Xpert MTB/RIF increases the chances that a case of TB can be diagnosed, however, the cost per test is considerably higher than that of smear microscopy.

The treatment of drug-susceptible TB involves delivering a standard regimen of TB treatment usually for six months, divided into two phases; an intensive phase for two months and a four-month continuation phase. In the last twenty - seven years the WHO has recommended the Directly Observed Treatment Strategy (DOTS). With this good treatment monitoring and high adherence, TB treatment is very successful, with over an 86 % cure rate in Nigeria. It should however be noted that despite the high success of treatment, TB and its treatment can still cause poor families substantial economic loss, primarily from loss of earnings while feeling unwell.

Strengthening TB control to achieve the desired targets requires substantial investment in both the health and social systems that would support the access to and the delivery of TB services in Nigeria – if deaths from TB are to be dramatically reduced. Particular attention needs to be given to identifying and preventing TB in those with HIV and the treatment of MDR-TB cases. Strengthening diagnosis capability also requires substantial support from laboratories and all the systems that support them, including systems to transport samples and quality control services. For treatment, ensuring a high quality of adherence support remains essential, and the treatment of MDR-TB may require substantial infrastructural investment.