Cancer Of The Testis (Testicular Cancer) - An Overview 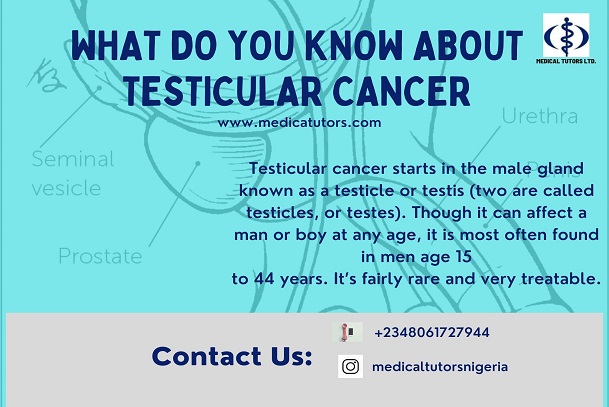 Summary
Testicular cancer begins when healthy cells in a testicle change and grow out of control, forming a mass called a malignant tumor.

The term cancer is usually used when certain cells in the human body begins to grow out of control and proportion. Any cell in the body can become cancerous, and this can spread from one part of the body to another. Cancer that tends to start from the testicles is term as Testicular Cancer or Cancer of the Testis.

Cancer of the Testis is a cancer that occurs in the men. It starts in the male gland called the testicle or testis (testes). It is a relatively rare type of cancer.

Testicular cancer begins when some healthy cells in the testicle begin to change or grow abnormally, thus creating a malignant tumor i.e., spreading to other parts of the body. This type of cancer can affect any male persons at any age, but it is commonly found among men aged 15 to 44 years. Due to its rare occurrence among the male species, testicular cancer is quite treatable, and with early diagnosis, it can be cured. Also, with good treatment plans, the risk of persons dying from testicular cancer is very small compared to other male cancers; though just like every other cancer, the overall health condition of the affected persons, cancer cell-type, and if it has spread to other parts of the body help aid the limit treatment side effects.

So as to detect testicular cancer early, it is advised that men learn about the early signs of testicular cancer; practice self-examination; speak to medical doctors whenever they notice any form of changes in their testes such as swelling, suspicious lump or pain in the testes.

The average age at diagnosis is 33 years; the condition mostly affects young and middle-aged men. In very rare cases, it can happen before puberty. Only 8% of cases occur after the age of 55.

The testicles or sometimes called the testes are part of the male reproductive system. They are two small egg-shaped glands that are held within a sac of the skin called the scrotum which is below the penis. The testes are usually two (2) in number, having a firm (the firmness of the testicle doesn’t change overtime), slightly spongy feel; and the size of the two testicles are mostly the same size, though one may be larger than the other.

The testicles have two (2) main functions:

They make and matures sperm, i.e., the male cells that copulate with the female egg during sexual intercourse to start a pregnancy. Sperm cells are made in long, thread-like tubes inside the testicles called seminiferous tubules. They're then stored in a small coiled tube behind each testicle called the epididymis. This is where they mature. During ejaculation, sperm cells are carried from the epididymis through the vas deferens to the seminal vesicles. There, they mix with fluids made by the vesicles, prostate gland, and other glands to form semen. This fluid then enters the urethra, the tube in the center of the penis through which both urine and semen leave the body.

They also make the male hormones (androgens) called the testosterone. The testosterone is the hormone that helps the development of the male reproductive organs and other form of masculine characteristics which includes control of sex drive in men; growth of muscle, bone and body hair.

The testicles are made up of many types of cells, where each of these cells can develop into one or more types of cancer, therefore the type of cancer of the testis depends on which cell or part of the testicles the cancer had started from; and this is quite important because treatment for these cells is different from one another. The type of testicular cancer can only be determined when they are looked at through the microscope.

Among all forms of testicular cancer, more than 90% of cancers of the testicle starts in the cells known as germ cells. These are the cells that are responsible for making sperm. Germ cell tumors can start in several parts of the male body.

Generally, non-seminomas tend to grow and spread more quickly than seminomas, but prompt diagnosis and treatment are important for both types of tumors.

Seminomas are a type of germ cell tumors that tend to grow and spread slowly than non-seminomas. They are sub-grouped into two types of tumors: Classical or typical Seminomas and Spermatocytic Seminomas.

These types of germ cell tumors usually occur in men between their late teens and early 30s. The four main types of non-seminoma tumors with each non-seminoma containing at least one of the following types of tumors. These tumors are Embryonal Carcinoma; Yolk sac Carcinoma; Choriocarcinoma; and Teratoma.

There are other less common types of testicular tumors that includes:

Leydig Cell Tumors: This is a type of tumor that can occur in both children and adults. These tumors begin in one of the cells in the testicle that normally make sex hormones (androgens) which is responsible for testosterone; and this cell is called the Leydig Cells. These tumors often make androgens (male hormones), but sometimes make estrogens (female sex hormones). Most Leydig cell tumors are not cancer (benign). They seldom spread beyond the testicle and can often be cured with surgery. They tend not to respond well to chemo and radiation therapy once they have spread.

Sertoli Cell Tumor: These tumors start in normal Sertoli cells, which support and nourish the sperm-making germ cells. Like the Leydig cell tumors, these tumors are usually benign. But if they spread, they usually don’t respond well to chemo or radiation therapy.

Carcinoma in Situ of the Testicle: This is when testicular germ cell cancers start as a non-invasive form of the disease. In carcinoma in situ of the testicle, the cells look abnormal under the microscope, but have not spread outside the walls of the seminiferous tubules (where sperm cells are formed). Carcinoma in situ of the testicle doesn’t always progress to invasive cancer, making it difficult for medical doctors to detect because it has no symptoms or form lump that they can feel.

Testicular Lymphoma: Testicular lymphoma is a secondary form of testicular cancer. It is the most common secondary testicular cancer that is found in men older than 50 years of age. It usually happens when some type of cancer from other part of the body might have spread to the testicles.

In Nigeria, testicular cancer or cancer of the testis are quite rare among men, yet it still constitutes the most common form of cancer among young men aged between 15 and 35 years. Unlike prostate cancer in Nigeria, testicular cancer is not usually discussed publicly due to the fact that it makes men uncomfortable especially when little symptoms such as pain in the testes are felt; they cite reasons like body pain or stress to such pains instead of seeking medical attention.

Among Nigerians, testicular cancer has one of the highest survival rates of all other cancers, up to 99%, if diagnosed early. And by education, many Nigerians would understand the various risk factors and symptoms associated with testicular cancer (cancer of the testis), and help oneself and others.

Globally, about 1 in 250 men are diagnosed with cancer of the testis while in Nigeria, less than 10,000 are men who have been diagnosed with testicular cancer i.e., a low incidence rate reported at 0.1% per 100,000 per annum.

[Next Article: How to Recognize Cancer of Testicles]