How To Recognize Cancer of Testicles 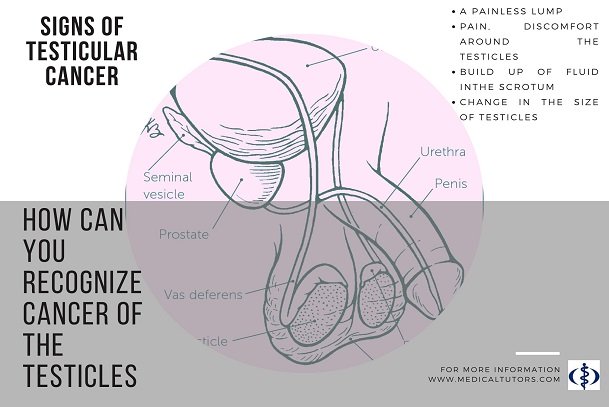 Cancer of the testicles, as earlier discussed in the previous article is a cancer that affects the male organ called the testicles, and it can begin from age 15 – 35 years; although it can extend to the age of 55 years depending on when it was discovered. This is why it is important for young adults (men) to pay enough attention to their body especially their testicles.

Usually, an enlarged testicle or a small lump or area of hardness are the first signs of testicular cancer. This is why lump, enlargement, hardness, pain, or tenderness should be evaluated by a medical doctor when one noticed such changes. Yet, having these symptoms does not mean that a person definitely has cancer.

Signs and Symptoms of Cancer of The Testicles

Symptoms of testicular cancer often appear at an early stage, but sometimes, they do not appear until much later; and these symptoms can include:

Advanced Cancer of The Testicles Signs and Symptoms

Whenever testicular cancer spreads to the other parts of the body, different men get different symptoms at various stages; that is why many men might not have any form of symptoms immediately when the cancer spreads. Yet, some would notice the following type of symptoms:

Just as explained above, it is important to note that some symptoms of testicular cancer have certain similarities to non-cancerous medical conditions (that means it might not necessary be cancer of the testicles when you have these symptoms). And these symptoms include:

Whenever there are concerns regarding changes noticed in the body, it is advised to seek medical advice on what steps to take, explaining all the forms of signs or symptoms noticed, and how long one might have been experiencing such symptoms. And to also help ease fears that might occur, it is best seek medical diagnosis.

[Next Article: Causes, Risk Factors and Prevention of Testicular Cancer]